Advertiser Disclosure
What would happen if you were hit with a financial emergency, big or small? Let’s say your car broke down — would you have the funds to repair it? Or, with hurricane season officially here in the U.S., would you have enough cash on hand to get through a natural disaster?

If you’re like most Americans, you would probably have a hard time paying for an unexpected expense. A 2017 GOBankingRates survey found that more than half of adults have less than $1,000 in savings. However, GOBankingRates wanted to find out whether Americans have enough money today to cover future emergencies. So, we surveyed more than 2,000 adults across the U.S. to find out what sort of savings they have to take care of the unexpected.

Read on to find out if Americans have enough saved to pay for emergencies.

Majority of Americans Are Unprepared for Life’s Curveballs 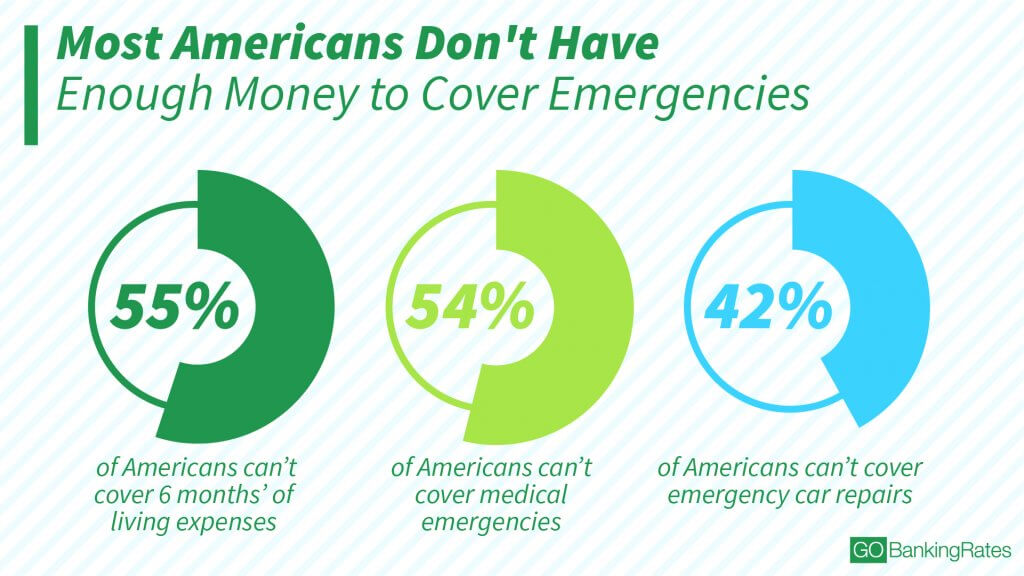 When it comes to savings to cover expenses in the event of a job loss, 38 percent of respondents have less than $1,000. More than a quarter (27 percent) of respondents actually have $10,000 or more saved. But even that might not be enough to survive a job loss for six months.

According to the Bureau of Labor Statistics, annual household spending in the U.S. is $57,311. Based on that amount, the average emergency fund should be $28,656 — enough to cover six months of expenses.

There could be plenty of reasons why Americans aren’t saving more money for emergencies. A GOBankingRates survey found that the most common obstacle to saving is a high cost of living, followed by low salaries.

High debt balances also are playing a big role in Americans’ inability to save.

“A steadily improving economy coupled with high levels of consumer confidence might lead some to believe that consumers are more financially stable than they have been in years, but we have seen other influencing factors that paint a different picture,” said Bruce McClary, vice president of communications for the National Foundation for Credit Counseling. “Credit card debt levels have passed the $1 trillion mark, while more people are carrying larger balances from month to month, making it more difficult for many consumers to focus on growing personal savings.”

Related: How Much to Save for Every Kind of Emergency

Millennials Are the Most Financially Unprepared Generation

The survey findings are even more discouraging when it comes to the savings habits of young adults. Millennials had the highest percentage of respondents who don’t have enough saved to cover emergencies. 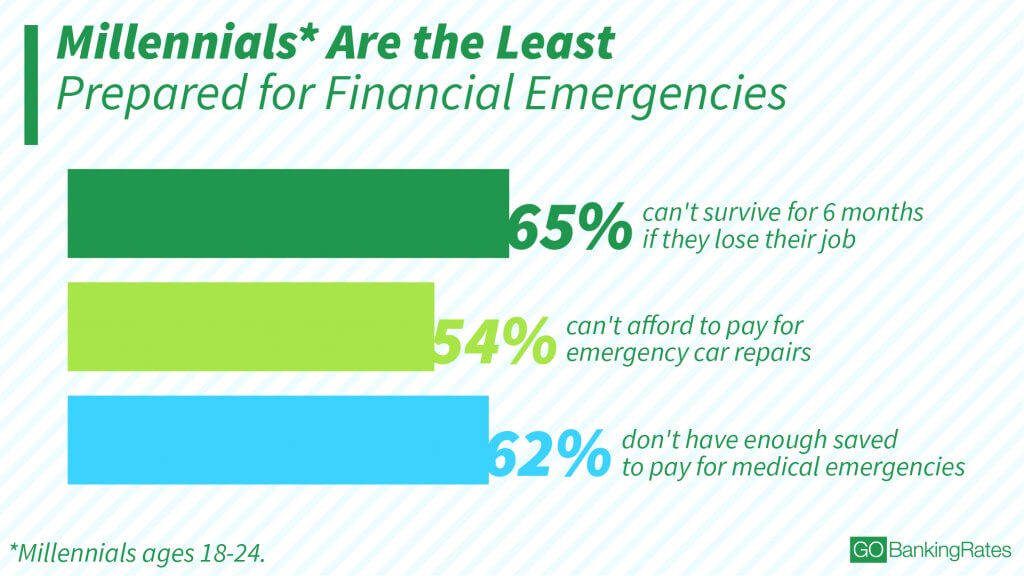 Young millennials have the highest percentage of respondents with less than $100 saved to cover living expenses after a job loss, car repairs and medical expenses — 26 percent, 33 percent and 30 percent, respectively. They also have the smallest percentage of respondents with $10,000 or more saved for those three emergencies, followed by older millennials.

It’s not too surprising that millennials have less saved than other generations. They haven’t had as much time as older generations to build their savings.

Take Notes: Here’s What We Can All Learn From Millennials and Their Money Habits

Seniors Are the Most Prepared for Financial Emergencies

It’s not too surprising that adults 65 and older are more likely than other generations to have enough saved to cover emergencies — considering they’ve had more time to build their savings:

Seniors might be more likely to have an emergency fund because they are less saddled with debt than younger generations. Adults 65 and older have less total debt than every generation except young millennials, GOBankingRates’ 2017 Household Debt survey found.

Women Are Less Prepared Than Men to Cover Emergencies

The survey shows that women are much less likely than men to have an emergency fund. 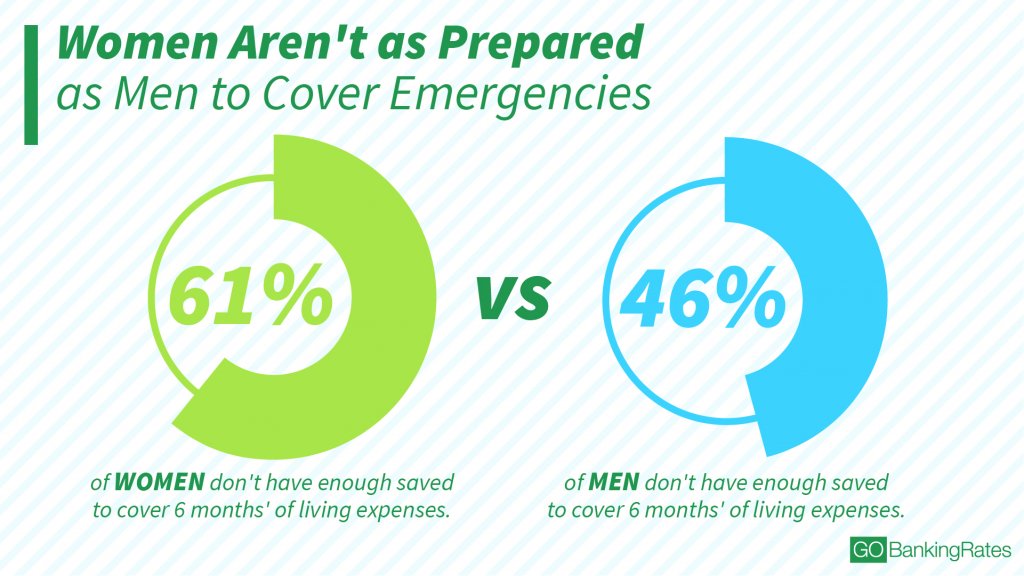 These findings are in line with another GOBankingRates survey that found that women are less prepared then men for another recession — in part because of a lack of savings.

There could be a variety of reasons why women are less likely to have money saved for emergencies, McClary said. “Among those reasons could be time away from the workplace for maternity leave or other family-related matters, which could interrupt the regular habit of savings deposits that would have been fueled by a steady income,” he said.

“They earn less, they work fewer years, they live longer and their healthcare costs are more,” he said. “When you add that up, it compounds the issue of prioritizing the emergency fund.”

How Much Should You Save for Emergencies?

The GOBankingRates survey shows that more than half of Americans likely wouldn’t have enough cash to cover common emergencies. As a result, they might rack up debt, have to drain retirement savings or ask friends and family to help pay for unexpected expenses.

McClary recommends that your emergency fund size should be equal to at least three to six months of your net income. “That makes it easier to manage everything from unexpected emergency medical expenses to job loss,” he said.

But it might not take that long or require such a large deposit each month if you stash any windfalls you get. For example, the average tax refund is nearly $3,000, according to the IRS. Putting that much in an emergency would help create a good financial cushion.

If you can only afford to stash, say, $25 or $50 a month in an emergency fund, that’s better than nothing. Just make it a habit by setting up automatic transfers from a checking account to a savings account. And make sure you don’t raid your account for other expenses.

“Make a list of what you think are emergencies, and then stick to it,” Scott said. “Don’t get confused about whether it’s a new carburetor for the car versus a super-cool giant HDTV at Costco. Know the difference and refer to your list if you aren’t sure.”

Click through to see 39 ways you can save for your emergency fund. 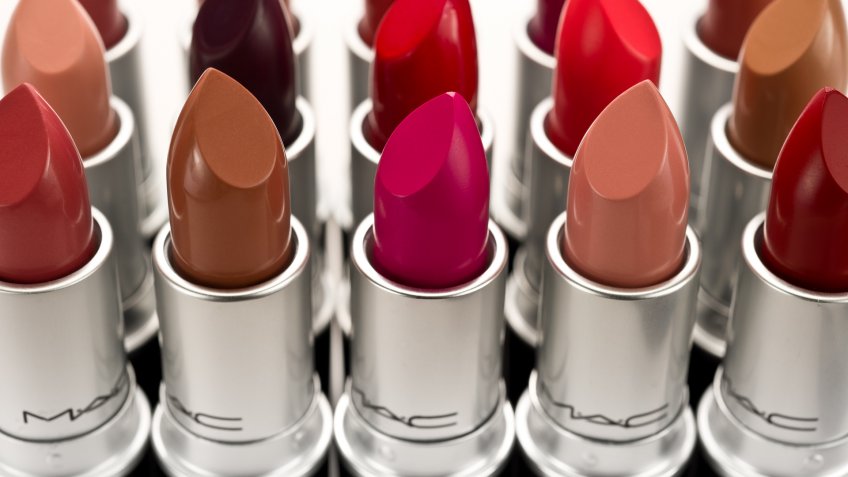 Quiz: Real or Fake? Guess the Real Product, and Learn to ID the Fakes

Can you spot the real and the fake items?