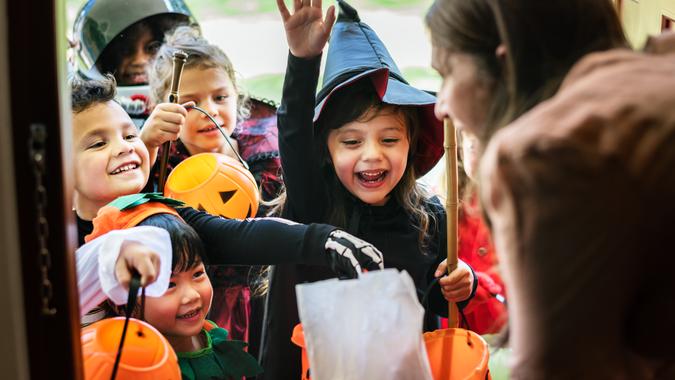 Spooky season has arrived! But the greatest scares are the unexpected ones on our credit card statements.

Fortunately, GoBankingRates has found the best prices so there will be no evil surprises. Whether you’re getting kids ready for the big night and making sure you’re stocked with enough candy to give the neighbors, or you need a last minute costume for a party, we’ve got you covered.

Here’s how to get all the treats without any tricks when you shop at Target and Walmart this Halloween.

Walmart: The lowest priced variety pack has 35 pieces, or about a pound of mini Reese’s, Twizzlers, Sour Patch Kids and Kit Kat for $4.88. You can get 50 mini pieces of Snickers, 3 Musketeers, Milky Way and Twix for $5.48.

Target: Target’s lowest priced variety pack has 35 mini pieces, coming out to a little more than half a pound, of Milky Way, Twix, 3 Musketeers and Snickers for $3.59. Note that although this is the same amount of pieces as Walmart’s lowest priced variety, it does have less weight to it. Pick up 55 mini pieces of Starburst and Skittles for $5.49, coming in at just over a pound in weight.

Winner: Target — You can get more candy for your cash, and have access to a wider variety of treats.

Walmart: Part of the fun of having a baby is putting them in an adorable costume. At Walmart, you can dress up your newborn as a super cute ghost starting at $8.88. Toddlers can be a chef starting at $10.59, and a pumpkin for $10.99.

Target: Newborns can be a lovable witch or a darling skeleton starting at $15. These costumes are currently buy 1, get 1 for 50 percent off.

Winner: Walmart — Because Target’s infant costumes are made by Hyde & EEK! Boutique, the price is a bit higher than Walmart’s.

Think About This: 15 Times You Should Splurge, Settle or Skip When Shopping

Walmart: The least expensive kids’ costume Walmart offers is a doctor, which starts at $13.30. Snag a Flash or Optimus Muscle costume for $15. There are two variations of Scooby Doo, one with a skirt, and one without, which are both less than $20 each. An Elsa costume will run you $21.04+. The most expensive kids costumes are a wolf for $56.98 and a Paul Stanley (from the band KISS) for $56.10.

Winner: Target — Though the individual prices are pretty comparable, if you have more than one child, the buy 1, get 1 half off deal is a tiebreaker.

Save Your Money: 11 Things You Should Never Buy New

Walmart: You can get a pirate costume for $9.99, or a pumpkin costume (maybe to match your baby?) for $12.21. For $41.98, you can get a king and queen of hearts couples costume. Though super timely costumes aren’t really available, you can dress up as famous characters, like Winifred Sanderson from “Hocus Pocus” for $29.97 and Pennywise for $40.23. If you’re really committed, you can drop $374.11 for a Hulk Hogan costume, which comes in at the most expensive getup Walmart offers.

Winner: Walmart — Across the board, Walmart offers less expensive costumes for adults.

Walmart: At Walmart, spiderwebs will cost $5.95 and a 19″ posable skeleton will run you $10.99. Hanging signs for a Halloween party? Those start at $14.99. The cheapest Halloween lights are creepy green LED mini lights for $3.97.

Target: Decorative spiderwebs start at $4 at Target. A 16″ posable skeleton is $5, and hanging signs start at $9.99. Target’s most affordable Halloween lights are mini incandescent string lights in a variety of colors for $5.

Winner: Target — Though their lights are slightly more expensive, everything else is more of a bargain than Walmart.

All prices are subject to change. Prices accurate as of Oct. 5, 2021