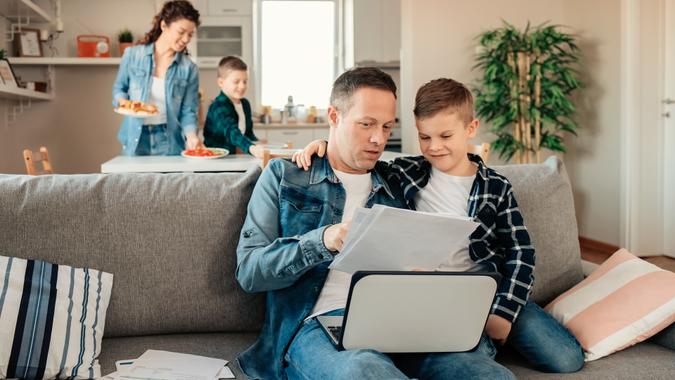 The next stimulus bill, the American Rescue Plan Act, passed through the House and has moved on to the Senate, where it’s likely to pass with a simple majority vote through a process called reconciliation. A few key elements are likely to be missing from the act — including an increase in the federal minimum wage.

However, one aspect nearly certain to pass is a $1,400 stimulus check for many Americans. But you could be receiving more federal if you have children. Here’s a breakdown of stimulus funds included in the bill.

How Much Your Household Can Expect to Receive

Under the new stimulus package, dependents of any age will receive a $1,400 stimulus to be included in a single check for the entire household, according to CNET. If you have direct deposit set up for tax refunds from the IRS, you could receive your money as early as mid-March, CNBC says. But if you are waiting for a debit card or check, you may not receive funds until some time in April.

See: Stimulus Payments Drive 10% Increase in Personal Income in January
Find: Calculating Your Stimulus Check – How Much (if Any) Will You Get?

Children and adult relatives who are dependents in a household also receive $1,400. It will be combined with the household check.

Families with children under the age of 17 will receive a child tax credit of $3,000, up from the current $2,000 American parents can now claim on their taxes, CNET says. Those with a child under the age of six will receive $3,600 for each child. The Tax Policy Center notes that the legislation doesn’t specify whether the fully refundable tax credit will be delivered as a lump sum or as monthly, quarterly or “periodic” payments to parents and legal guardians. Democrats are pushing for monthly payments, which would make the money almost like a Universe Basic Income for children.

See: Basic Income – Could This Out-There Idea Get America Out of the COVID Crisis?
Find: All the Costs of Having Kids Home for Almost a Year

Finding reliable, affordable childcare has been a battle for working parents, aggravated by the pandemic. According to statistics from the U.S. Census, almost one in five working-age adults couldn’t work because the pandemic disrupted their current childcare arrangements.

The new legislation seeks to find a solution by providing up to $4,000 in child-care tax credits for one child under the age of 13 and $8,000 for two or more children, CNET reports. Like the child tax credit, the childcare credit is fully refundable, which means you can receive the funds even if you don’t have a tax liability. The credit, available for families making less than $125,000 per year, begins phasing out at $125,000 and disappears at $400,000.