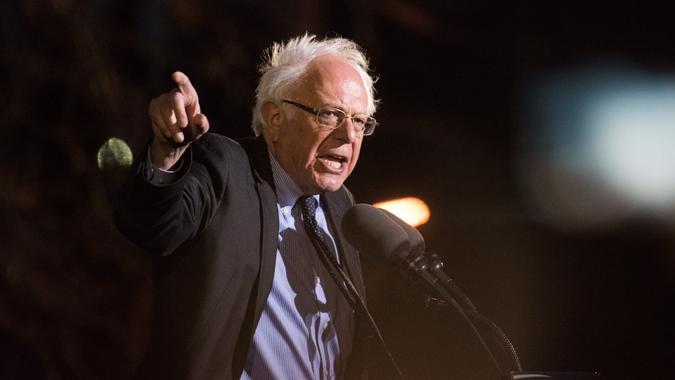 Sanders’ tax changes would, additionally, seek to prevent tax avoidance on the part of large corporations, Common Dreams reported. Under the proposed legislation, companies that pay their top executives between 50 and 100 times more than the median salary of their wage workers would pay 0.5% more in corporate taxes.

Prior to a Senate Budget Committee hearing on income equality earlier this week, Sanders circulated a memo explaining, “If companies increased annual median worker pay to just $60,000 and reduced their CEO compensation to $3 million they would not owe any additional taxes under this plan,” MarketWatch writes.

In 1980, the average pay gap between the CEOs of larger companies and typical workers there was 42 to one. Today, the gap has widened to an average of nearly 350 to one, Sarah Anderson, director of the Global Economy Project at the Institute for Policy Studies, said to MarketWatch.

See: Economy Explained: What Does the Fed Do, Anyway?
Find: Trillions of Dollars Have Been Spent on COVID-19 Relief – And It’s Still Not Enough

Corporate Tax Hikes: Who Would Pay the Most?

Other major retailers would also pay increased taxes, Common Dreams reported, with substantial tax bill increases for companies such as:

Sanders called the bill the Tax Excessive CEO Pay Act, noting in a statement, “At a time of massive income and wealth inequality the American people are demanding that large, profitable corporations pay their fair share of taxes and treat their employees with the dignity and respect they deserve. That is what this legislation will begin to do.”

See: Should the Minimum Wage Be $15? Take Our Poll
Find: What Biden’s Proposed Tax Hikes Mean for Average Americans

How This Bill Could Affect the Gig Economy

However, the legislation could adversely affect workers in a growing gig economy. The bill would require the Treasury Department to issue expanded regulations to protect tax avoidance, Common Dreams reported. These measures could include cracking down on tactics where companies use independent contractors rather than employees to manipulate the compensation ratio by changing the composition of the workforce, the bill stated.

A survey by FlexJobs showed that 36% of American workers have freelanced during the pandemic, up 2 million from 2019. More than one-third of those are freelancing full time. Meanwhile, a Monster survey discovered that 57% of Americans said they would take a gig job while they were seeking full-time employment.