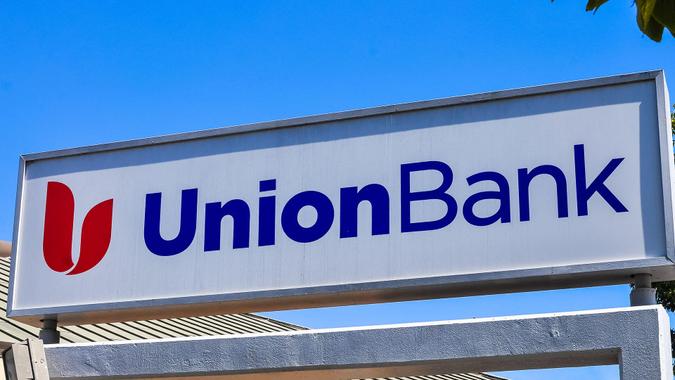 Union Bank operates under its parent company Mitsubishi UFJ Financial Group. The company says it has a global vision to be the world’s most trusted financial group and considers integrity, respect and service to be among its top values.

If this sounds like a bank you want to do business with, you’ll need to know your routing number after opening an account. You’ll also need to know this number if you don’t have a Union Bank account but want to make certain transactions with someone who does. Finding your Union Bank routing number is simple and straightforward.

See the Union Bank routing numbers in the table below.

What Is a Union Bank Routing Number?

Every financial institution, including Union Bank, is assigned a special code by the U.S. Federal Reserve. The code has several names including an ABA routing number, ACH number and bank transit number. It is most commonly referred to as a routing number.

This number is made up of nine digits that work to identify the specific bank or credit union you’re using, as well as the bank or credit union’s location. This is possible because no two financial institutions have the same routing number. Each time you make a transaction using a paper check or send money electronically, the financial institution will review the routing number to discover exactly where the funds need to go.

How To Find Your Union Bank Routing Number

There are a few ways to find a Union Bank routing number. If you remember which state you opened your account in, just use the chart.

If you have a Union Bank checking account, you can also find your routing number on a check — the check routing number is the first nine numbers in the lower left corner. You might not have a check handy, however, so you can also call Union Bank any time at 800-238-4486 to find the routing number for your account. If you are at all confused about which number to use, you should consider calling Union Bank because using the right number could mean the difference between your money going into the right or wrong account.

The first two digits represent which of the 12 districts the financial institution is in. If you take a look at Union Bank’s direct deposit routing number of 122000496, you’ll see the 12 reveals the bank does business out of the 12th district, which is San Francisco. A 05 would indicate Richmond and 10 is Kansas City. Digits three and four of the first set of numbers pinpoint the bank’s regional processing center and its location.

The second set of numbers within the routing number consists of digits five through eight and is for identifying your specific bank or credit union. That means the numbers 0049 are set aside for Union Bank. The Federal Reserve uses the last set of numbers, which is just one digit, as a way to ensure the entire routing number is valid. This digit is appropriately called the “check digit” and it is derived from a special mathematical algorithm.

In addition to sometimes being assigned multiple routing numbers for checks and direct deposits, like Union Bank, financial institutions typically are given a different routing number to use for wire transfers. Union Bank uses 122000496 for wiring transfers.

Customers who wish to send a wire transfer outside of the United States might also be asked to provide a SWIFT Code, which is made up of both letters and numbers. This code always contains between eight and 11 characters. Union Bank’s SWIFT code is BOFCUS33MPK.

Knowing Where to Find Your Bank ABA Number

Union Bank customers can quickly locate their bank transit number by looking at their checks. The first set of numbers across the bottom left-hand corner of each check is the bank’s routing number. Next to it you’ll see your specific account number, with the check number printed right after that. The ABA routing number is also printed on the deposit slips that are issued with each set of checks.

Another way to find your routing number is to call Union Bank’s customer service department at 800-238-4486. A representative will be able to look up the number and provide it to you over the phone.

Editorial Note: This content is not provided by Union Bank. Any opinions, analyses, reviews, ratings or recommendations expressed in this article are those of the author alone and have not been reviewed, approved or otherwise endorsed by Union Bank.

Alicia Bodine is a New Jersey-based writer specializing in finance, travel, gardening and education. With more than 13 years of experience, her work has appeared in Chron.com, Livestrong, eHow, USA TODAY, GlobalPost, Education.com and wiseGEEK.
Learn More