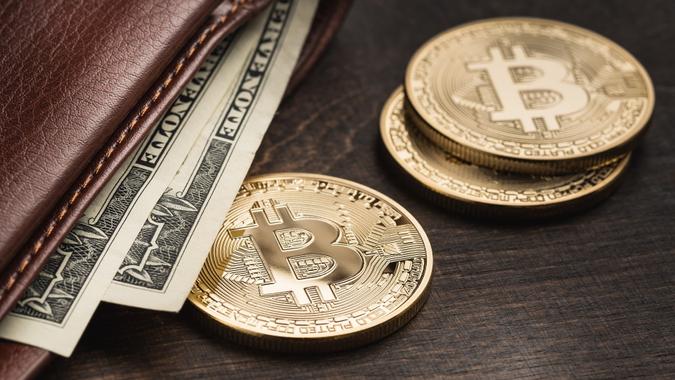 The Federal Reserve has said it will soon begin raising interest rates, and industry experts as well as investment analysts are weighing in on how this economic shift will affect the outlook for Bitcoin — particularly as the asset has matured since the previous hikes, and the crypto has seen increased adoption.

“I would say that the Committee is of a mind to raise the federal funds rate at the March meeting, assuming that conditions are appropriate for doing so,” Fed chairman Jerome Powell said at a press conference on Jan. 26, according to a transcript of his remarks.

A new CoinShares research report, “CoinShares 2022 Digital Asset Outlook,” argues that Bitcoin is likely to behave in a similar way to gold and other real assets during this interest rate hiking cycle.

“We have already seen in December 2021 and January so far this year that Bitcoin is extremely sensitive to the threat of interest rate hikes,” according to the report.

Bitcoin Fighting Back After Falling From All-Time High

James Butterfill, CoinShares investment strategist, wrote in the report that Bitcoin rose by 51% six months after the first rate hike in 2015, but also that the crypto  “has matured significantly since then and is therefore likely to behave differently, and likely in line with other real (inflationary) assets. Therefore, analysis of how other real assets have behaved in previous rate hiking cycles are likely to give us some idea as to how Bitcoin may behave.”

Since hitting an all-time high of $69,000 in Nov. 2021, Bitcoin has suffered one of its biggest drawdowns — the 52.3% decline from the peak thus far ranks 6th in Bitcoin’s history, according to a NYDIG report. However, Bitcoin seemed to stabilize following the Fed’s announcement and is hovering around $37,000 as of Jan. 28.

Bill Shihara, co-founder of crypto exchange Bittrex, told GOBankingRates that for the last few years, we have seen increased coupling between Bitcoin and the broader market — and as it’s matured, Bitcoin has begun to act more like traditional risk assets than it had previously.

“This means that rate movement is becoming increasingly important for Bitcoin and the broader digital assets market. During the rate hike in 2015, it was an entirely different landscape. Bitcoin was still a speculative, relatively unknown asset. In 2022, we are seeing billions of dollars in venture capital money pouring into the space, and these venture capital firms are very dependent on the wider financial environment,” Shihara said.

“Rate rises increase the cost of borrowing money, and often slow down investing. I will caution, though, by noting that this coupling can come undone. If we know anything about Bitcoin, it’s that it can be unpredictable. Watching how Bitcoin responds to the likely rises of 2022 is going to show us a lot about how much the digital assets space has changed.”

Bitcoin: From Novelty to Asset

Jonathan Padilla, CEO of Snickerdoodle Labs, notes that comparing Bitcoin in 2015 to Bitcoin in 2022 is comparing two completely different assets, telling GOBankingRates that  Bitcoin was a novelty in 2015 and too small to be pushed by macroeconomic trends the way it is now.

“With major institutional investors now, Bitcoin is far more similar to standard risk-on assets than it was in 2015, and rising rates are likely to affect it as such. Its value has tumbled in recent weeks over fears of the rising rates, but I expect it to act like any other asset which is seeing increasing investment and institutional interest, which is to say, it will go up, just slower than it would if interest rates were low.”

The Stage is Set For Bitcoin’s Continued Adoption

Several experts in the space agree, including Michal Cymbalisty, founder of Domination Finance. He told GOBankingRates that in anticipation of the Fed raising interest rates, traditional and more sophisticated investors sold their risk-on assets such as growth stocks and cryptos, which is part of the reason why we have seen significant declines in Bitcoin’s price over the past month alongside the S&P500 and NASDAQ.

He added, however, that interest rates were hiked three times in 2017, which actually coincided with a strong year of growth for both Bitcoin and the traditional stock market.

“This time around, it is looking increasingly possible that the prospective rate hike was a ‘sell the rumor, buy the news’ event. Bitcoin temporarily bottomed out around $33,000, over 50 percent down from the all-time high of $69,000. It has rebounded quite strongly and is currently trading above $38,000,” he said.

Cymbalisty remains optimistic as to Bitcoin’s trajectory, saying that interest rate hikes may temporarily stall Bitcoin’s growth — but also that the long-run outlook of both Bitcoin and the cryptocurrency industry as a whole seems unfazed.

“Institutional money is continuing to pour into the space and crypto is being adopted by more regular people, financial institutions, and nation-states every day,” he said. “Even if there is a continued drawdown in the short/mid-term, it is difficult to build a long-term bear case for Bitcoin in this macro environment. The stage has been set. The goal for Bitcoin investors at this point should be to weather any upcoming storms and see its sound money thesis play out.”