Could COVID Pill Prospects and Demand Boost Pfizer Stock Even More, or Is It Time to Sell? 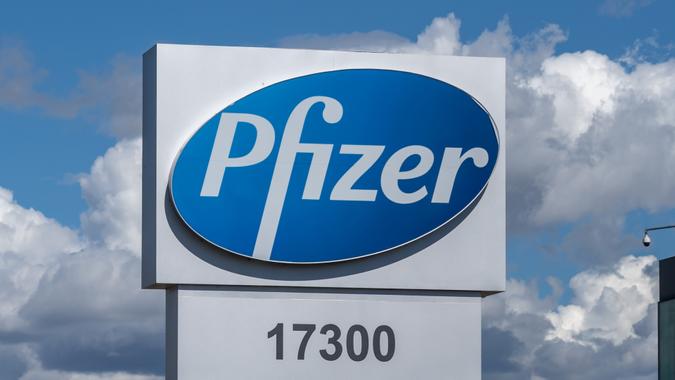 Pharmaceutical giant Pfizer offered a bullish outlook on the future of its COVID-19 antiviral treatment this week, even in the face of recent setbacks with the pill and uncertainty on the part of Wall Street about its impact on the company’s stock price.

See: 22 Side Gigs That Can Make You Richer Than a Full-Time Job
Find: 25 Things To Sell When You’re Ready To Retire

Speaking to analysts on a conference call, Pfizer CEO Albert Bourla said Paxlovid plays an important role in helping governments limit the severity of outbreaks as they ease social distancing and masking rules, Yahoo Finance reported. He added that Pfizer is seeing “very strong signs of increasing demand for Paxlovid as it remains one of the best tools we have.”

Bourla also said the company is focused on a COVID-19 vaccine booster that provides immunity for a year.

“People are tired of the repeated booster, so it is extremely important to come to a vaccine that could be a yearly vaccine,” he told analysts. “It’s not technically easy to achieve.”

His comments came a day after Pfizer shares temporarily dipped on last week’s news that Paxlovid failed to show benefit as a preventive therapy in a trial.

As Bloomberg reported, the company said late Friday that the oral pill failed to hit its primary goal of reducing the risk of infection for adults exposed to COVID through contact with a household member. When compared to those who took a placebo, people who received Paxlovid had about one-third less risk of infection, which isn’t statistically significant.

But that setback probably won’t change the drug’s sales potential, according to Bloomberg Intelligence analysts John Murphy and Sam Fazeli. Paxlovid is expected to become one of the fastest-selling drugs of all time with $24 billion in 2022 sales, according to estimates from Airfinity, an analytics group.

Pfizer itself projects Paxlovid to deliver 2022 sales of $22 billion as the company ramps up production and distribution. It expects to produce 120 million courses of the pill this year.

Despite the boost from its COVID program, Pfizer shares have not been able to break out of a slump this year amid an overall malaise on the stock market. Pfizer’s stock is down about 13% for 2022, though it has rebounded 8% since hitting a 2022 low of $45.40 in late February.

Analysts still rate the stock a “buy” overall. According to Yahoo Finance, the 22 analysts who followed the stock as of May 4 gave it an average rating of 2.3, putting it mostly in “buy” territory. Half of those analysts have a “buy” rating on the stock, while nine have a “hold” rating. The others are split between “strong buy” and “sell.”