Several Fed Officials Support the Start of Tapering Now — What Would It Mean for Interest Rates? 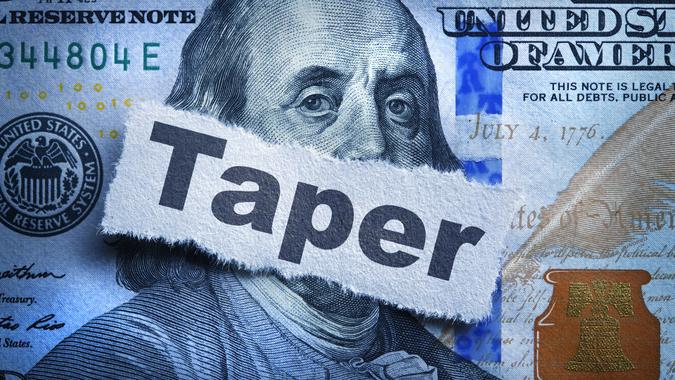 Less than a week after the Federal Reserve hinted that it might start slowing its pace of assets if the U.S. economy continues to show improvement, at least three Fed officials said they support a pullback even without a threat of inflation.

Learn: Why Inflation’s 6% Cost-of-Living Increase to Social Security Could Be a Double-Edged Sword
Government Shutdown 2021: Will SNAP Benefits Be Impacted?

Fed Governor Lael Brainard and regional presidents John Williams of New York and Charles Evans of Chicago — who spoke at separate engagements — said they are okay with a gradual pullback on monthly asset purchases that are designed to support the economy, CNBC reported.

Such a pullback, known as tapering, would signal confidence in the economy even amid a rise in COVID-19 cases tied to the Delta variant and the threat of higher inflation in coming weeks. Tapering is a way for central banks to control interest rates, and can also lead to deflation.

In remarks to the Economic Club of New York, Williams said “it’s clear that we have made substantial further progress on achieving our inflation goal. There has also been very good progress toward maximum employment. Assuming the economy continues to improve as I anticipate, a moderation in the pace of asset purchases may soon be warranted.”

But Fed officials warned against using tapering as a signal that they will raise interest rates, also known as “liftoff.”

“The forward guidance on maximum employment and average inflation sets a much higher bar for the liftoff of the policy rate than for slowing the pace of asset purchases,” Brainard told the National Association for Business Economics. “I would emphasize that no signal about the timing of liftoff should be taken from any decision to announce a slowing of asset purchases.”

The Fed has been considering tapering its asset purchases for some time now, with investors expecting the Fed to slow its pace when the economy began to pick up steam over the summer. However, that changed with a disappointing August jobs report. The Fed helped lead COVID-19 relief efforts during the early days of the pandemic by purchasing $120 billion worth of assets every month — $80 billion in Treasury securities and $40 billion in mortgage-backed securities. But last week, the Fed’s Federal Open Market Committee (FOMC) said it will taper its purchases if certain employment and inflation goals are met.