Defense Secretary James Mattis is the latest casualty in the Trump Cabinet wars. The retired four-star general quit on his own accord on Dec. 20 just a day after President Donald Trump announced the withdrawal of U.S. troops from Syria. Mattis stated in his resignation letter that his views weren’t “aligned” with the president’s, though he will remain in his position until the end of February 2019.

Unlike other Trump Cabinet members, Mattis’ background is military, not banking or finance. But how did the former Marine’s military career build up his wealth?

Find out more about Trump’s soon-to-be former defense secretary below — and learn about the net worths of more Trump staffers here.

James Mattis’ net worth is $7 million, Politico Magazine reported in its March/April 2018 issue. Mattis’ main source of wealth likely comes from his military salary and pension. The monthly earnings of a four-star general were $14,975.10 in 2013, the year Mattis retired. Once Mattis rose to the rank of four-star general in 2007, it became likely that he would earn at least $1 million between his final promotion and retirement.

Like many ex-military brass, Mattis enjoyed, and still enjoys, a lucrative post-service career in the defense industry. Mattis is or was “worth as much as $10 million, according to a financial disclosure filed with the Office of Government Ethics,” reported Politico in a January 2017 profile. The disclosure included between $600,000 to $1.25 million in stock and options in major defense contractor General Dynamics, where Mattis sat on the board of directors, according to Politico.

According to Mattis’ financial disclosure from December 2016, one of his biggest assets was a Vanguard income fund valued between $100,001 to $250,000. Mattis has also received honorarium payments from defense industry related companies such as Northrop Grumman and Calibre Systems.

Trump first tapped James “Mad Dog” Mattis to be his secretary of defense in December 2016. Pundits noted that the move was unusual because the position is usually reserved for civilians. Mattis also disagreed with Trump on much of his foreign policy.

Mattis did have extensive military experience. His career milestones included leading the 1st Marine Division in the invasion of Iraq. And like many of Trump’s Cabinet picks, his tenure was not without controversy. Fatal actions taken by troops under Mattis’ command have resulted in questioning about whether the general committed war crimes.

Don’t Miss: No Recovery in Sight for Paul Manafort’s Net Worth

Mattis was the first member of Trump’s Cabinet to be confirmed. His vision for his role included bolstering U.S. alliances and expanding the military budget. More recently, he defended the actions of the troop buildup at the border in response to the immigration crisis. Many saw the move as a money-wasting political stunt.

We make money easy. Subscribe to our YouTube channel for more videos on how to Live Richer™. 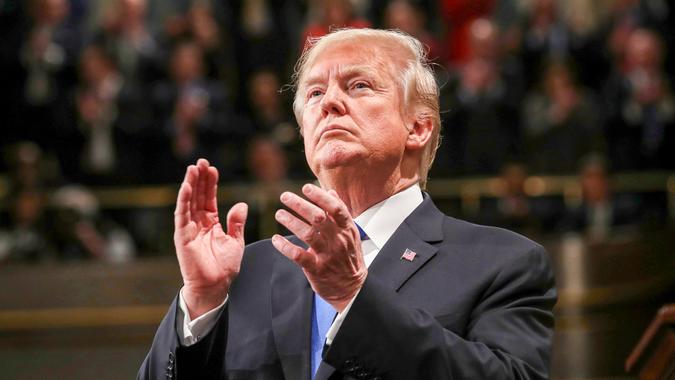 What’s Donald Trump Worth? A Look at the President’s

Trump delivered his second State of the Union address on Feb. 5.