Amazon’s fourth annual Prime Day sales began at 3 p.m. Eastern time on July 16, 2018 — and is planned to run until midnight Pacific time on July 17 — but many of the links on its landing page started sending shoppers to an error page just minutes into Prime Day, according to TechCrunch. The yearly sale event is exclusively for Amazon Prime members and typically includes more than 100,000 deals over approximately 36 hours. With shoppers either having to use smile.amazon.com as an alternative option reported by TechCrunch or checking out competitors’ deals, Prime Day 2018 could end up being a big disappointment. The impact on its year-over-year sales remains to be seen.

In 2015, the first Amazon Prime Day was such a success it actually exceeded Black Friday records at that time, with a total of 34.4 million items sold — the equivalent of 398 items sold per second. In 2017, Amazon Prime Day shattered those records, with an estimated $2 billion in global sales, Retail Dive reported.

If you’re not currently an Amazon Prime member, but you want to take advantage of Prime Day sales, you can sign up for Amazon Prime for $119 per year or $12.99 per month.

Keep reading to check out the best Amazon Prime Day deals from Amazon — and alternative sales on Prime Day from other retailers — and click to find out how you can save money while shopping on Amazon.

The Amazon Echo Show is marked down $100 for Prime Day. The device takes Alexa’s capabilities to a new level, as she can now display lists, photos, videos and more on the Show screen.

He Started It All: The Net Worth of Amazon’s Jeff Bezos

The mini version of the Echo is a great starter device for a smart home. It can do all the things the Echo can, but the speaker is very limited and not meant to function as a music player. Last year’s sale price was an all-time low price from Amazon, and it has been matched in 2018.

The Kindle Paperwhite is one of Amazon’s most popular e-book readers, and the $79.99 Prime Day price tag is a welcome reduction from the usual price exceeding $100.

In 2017, a Fire 7 Tablet sold for $30 during Amazon Prime Day, and 2018’s sale remains the same. However, this variety pack comes with not one, not two, but three HD 8s, with 12 hours of battery life, an 8-inch HD display and Alexa compatibility.

Order your go-to products at the touch of a button — literally — with an Amazon Dash Button. Even though you get the $4.99 back after your first purchase when you buy a button for the regular price, it’s now even more tempting to buy one when the prices are so low.

Get unlimited, on-demand access to any song with Amazon Music. The ad-free streaming platform can be accessed through Alexa — and it’s discounted dramatically for Prime Day 2018.

Get unlimited access to over 1 million books, popular magazines and Audible books with a Kindle Unlimited subscription. For less than $1, you’ll get access to the Kindle service for three months before having to pay the regular subscription fee.

This electronic styling assistant helps you look your best by letting you view your outfits from multiple angles and light settings. Its Style Check feature combines machine learning algorithms and tips and tricks from fashionistas. The only thing that looks better than a good outfit is that $100 markdown.

This interactive vacuum works with Alexa for voice control — “Alexa, clean my room” — and comes equipped with Wi-Fi connectivity. Users can set cleaning schedules away from home, and the machine itself cleans for up to 90 minutes before automatically docking to recharge. Take advantage of Prime Day’s $120-off sale price for this electronic helper.

Find Out: How Much Is Amazon Worth?

You can also expect to see major discounts on other 4K TVs, as well as video game consoles including the Nintendo Switch, PlayStation 4 and Xbox One. Overall, there are sure to be thousands of deals on items across all of Amazon’s product categories, including business and industrial supplies, products for the home, outdoor products, sports and fitness equipment, tools and more.

Prime members who spend $10 in-store will also receive $10 to spend for Amazon Prime Day. Additionally, customers who use their Amazon Prime Rewards Visa Card in-store can earn 10 percent back on Whole Foods Market purchases on up to $400.

Major retailers other than Amazon are offering competitive sales July 16-17, 2018. Check out these Prime Day alternatives. You could save big at these sales that don’t require a Prime membership.

Target’s One-Day Sale means shoppers and deal-seekers have even more chances to save money on July 17, 2018. The retailer’s online-only sale to compete with Amazon on Prime Day includes:

Big spenders who purchase $399 or more have the option to finance their purchase over the span of 12 months. Perhaps that big purchase could go toward a Samsung 82″ LED TV, which customers can currently save $1,000 on.

Shoppers who are unable to take advantage of Amazon Prime Day should keep an eye on Walmart’s Ultimate Summer Savings as an alternative. Some items you can expect to save money on include:

You don’t have to be a member of anything to take advantage of eBay’s one-day sale. Use promo code PRIMO119 by 11 p.m. Pacific time, July 17, to save $25 off eligible purchases of $119 or more. The website features other deals such as 15 percent off a Nintendo Switch console and a Polk audio system that’s currently about $300 off.

With free shipping on almost everything, plus an extra 15 to 25 percent off using promo code SHOPIT, it might be hard for shoppers to say no to Macy’s online-only sale. Save on stylish selections such as I.N.C.’s linen jacket or Levi’s Aloha Surf Collection. No need for a wardrobe update? Focus on other items instead, like a 525-thread count yarn dyed bedding collection.

Click through to read more about ways Amazon is making it easier to spend your money. 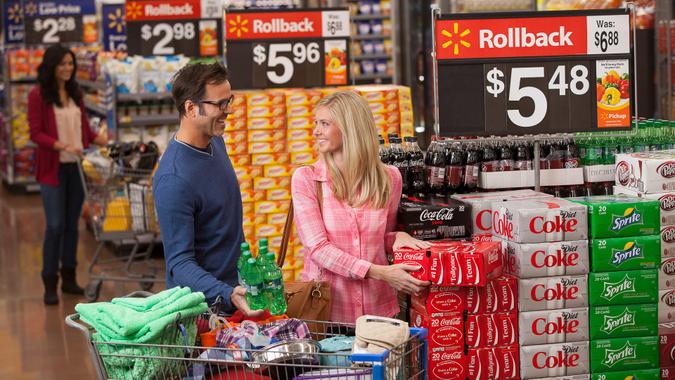