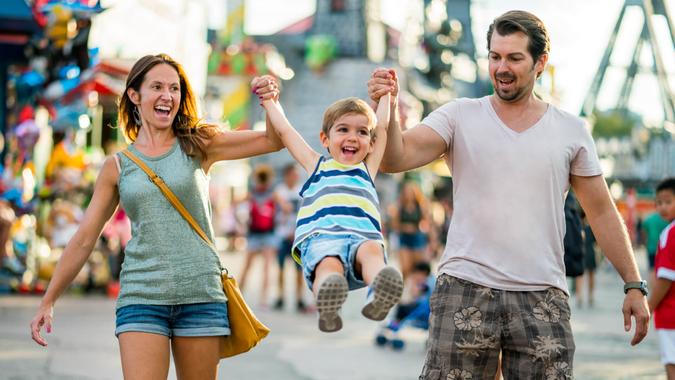 Though the global pandemic isn’t over and there are progressing concerns around the new Delta variant, the world has largely reopened and so have theme parks in the U.S. And consumers are racing to their golden gates.

Read: ​30 Theme Park Secrets Only Insiders Know
See: Here’s How Much It Cost To Go To Disney World the Year You Were Born

Infamously expensive, theme parks and a tight budget don’t exactly go hand in hand, but there are, in fact, plenty of ways to save when visiting these money-sucking destinations. GOBankingRates consulted travel and resort experts to learn some of their favorite tips for trimming costs.

“Before heading out on your next amusement park visit, make sure you check for deals with AAA,” said Ouriel Lemmel, CEO and founder of WinIt. “AAA offers savings on tickets for many parks. You can even save up to $80 off a stay at Walt Disney World Resort.”

More Savings: The Best AAA Discounts To Take Advantage Of
Explore: 10 of the Most Affordable Water and Amusement Parks Across the US

See What Undercover Tourist Has To Offer

Phil Dengler, co-owner of The Vacationer, recommends that those planning a theme park visit check out the site Undercover Tourist.

Depending on the ticket and days, savings may be higher or lower, but, Dengler asserts, prices are always cheaper on Undercover Tourist than the official park websites. There are also always additional offers for more savings, such as adding more tickets or booking a hotel.

Find Out: How Much Does It Really Cost To Go To Disney World Now?
Universal Orlando vs. Universal Hollywood: Which Is a Better Choice for Your Wallet?

Because of the pandemic, some theme parks (including Disneyland) require guests to make reservations in advance online to ensure that park capacity is reduced, but even once that stipulation lifts, parkgoers should continue to book tickets online.

“Most guests will save money by purchasing their theme park admission online in advance,” said Len Testa of touringplans.com and co-author of the “Unofficial Guide to Walt Disney World” travel book. “For example, Walt Disney World and Universal Orlando charge an extra $20 per person for many multi-day tickets bought at the theme parks.”

Go Off-Season and Get a Vacation Package

Understandably, most families want to travel to theme parks during summer break, school breaks and holidays, but if saving money is your goal, be flexible with your dates and visit theme parks off-season.

“Not only will you find deals but low crowd levels, too,” said Steve Griswold, owner of Pixie Vacations. “You can save the most money by getting a vacation package. For example, a Disney World Vacation Package would include your room, park tickets and the Disney dining plan. You can even add airfare to the package, but should check airfare on your own, too. By bundling everything into a vacation package you end up getting a discounted room rate and a discount on park tickets.”

Discover: Disney’s 27 Biggest Controversies
Disneyland vs. Disney World: Where Can You Get More for Your Money in 2021?

The same methodology can be applied to other theme parks such as Universal Orlando Resort.

“Universal Orlando Resort opens Halloween Horror Nights 30 this September and that event books up with locals on the weekends quickly, so I would go and book on other nights to avoid the crowds and to get the Universal resort hotel you want,” Griswold said.

Bring Snacks and Order From the Kid’s Menu

Most theme park goers already know to bring their own snacks and water bottles, but they should also implement other dining hacks, like ordering from the kids’ menu at restaurants and food stands.

“For example, an adult dining at Chefs de France at Epcot could save over $20 on their entrée by ordering the children’s salmon rather than the salmon entrée from the main dinner menu,” said Darcy Vierow of Plan, Ready, Go.

Check Out: 13 Insider Secrets From Travel Agents That Will Save You Money
Learn: 35 Things Your Hotel Will Give You for Free

Bring Your Own Ponchos

“If you’re visiting Florida, sudden rain storms are a regular occurrence,” said finance writer Kat Tretina. “Ponchos can ensure you can keep having fun, but they typically cost $8 and up at the theme parks. If you bring your own, you can get them much cheaper. Walmart and Amazon have ponchos that are $0.98, so you can get them for the whole family for about $4.”

“Souvenirs can be prohibitively expensive, but a little-known secret is that Disney operates an outlet store just a few minutes away from the parks: the Disney Character Warehouse,” Tretina said. “You can get authentic theme park merchandise for as much as 75% off.”

Theme park goers looking to stock up on souvenirs and merchandise should also check out big-box retailers near their destinations.

“I grew up in Orlando, Florida and the one hack I can advise people who are visiting is that the nearby grocery stores (Walmart, Target) surrounding the parks have sections where there’s tons of Disney/Universal merchandise [at a] huge percentage off,” said Genesis Gutierrez of MySevenSouls. “It’s the same quality, too.”

If You’re Going: The Best and Worst Airlines for Cheap Flights
Find Out: 30 Locations With the Priciest Vacation Rentals

Pack a Bag of Essentials

“​​There is nothing worse than having to spend $15 on a bottle of sunscreen at the parks, or $8 for a small package of aspirin,” Tretina said. “Before heading to the parks, pack a bag of things you might need — and that you can purchase at the dollar store. Sunscreen, bandaids, aspirin, indigestion meds and resealable bags (great for storing your phone or keys on Splash Mountain). For under $10, you can prevent having to spend $50 or more at the parks.”

Create a Schedule and Take a Midday Break

“It’s really easy to fritter money away when everyone is hot and tired,” Tretina said. “In 90+ degree [weather], with cranky children and deep crowds, purchasing ice cream (or a $12 margarita) sounds appealing.”

To curb impulse buys and keep everyone feeling refreshed, Tretina recommends setting a tight schedule and going early in the morning to beat the heat, then taking a break midday and going back to the hotel where “everyone can swim, eat lunch or nap, and go back to the parks in the evening refreshed,” Tretina said. “I typically avoid the parks between 11 a.m. to 4 p.m. because of the heat and crowds.”