Cryptocurrencies have been met with skepticism by powerhouses in the investment world like Warren Buffett and JPMorgan Chase’s Jamie Dimon, who have famously rebuked it.

The bitcoin investing frenzy might have cooled, but its future still shines brightly. So how exactly do you get a piece of the currency for the digital age?

GOBankingRates answers your most important questions to help you so you can also find out how to spend your bitcoins.

How do I buy bitcoin?

Naturally, the digital currency is purchased digitally. There’s no shortage of digital exchanges and marketplaces, like Gemini or Changelly, which are both dedicated to exchanging cryptocurrency.

Not Buying Bitcoin? 7 Alternatives to Consider Investing In

Where do I buy bitcoin?

Instead of paying a licensed broker to buy, sell or trade on your behalf, you control bitcoin transactions from your smartphone with free apps like Coinbase, LibertyX or Cash App, which all allow you to buy bitcoin. You can even blend 20th-century and 21st-century banking by visiting one of the over 3,400 bitcoin ATMs located around the U.S. and the world.

Once you’ve purchased your bitcoin, it will be stored in your virtual wallet.

Whether you decide to hang on to it or spend it on a spree, there’s a growing list of retailers that now accept bitcoin as tender.

How do I pay for bitcoin?

Buy with cash, credit, debit, wire transfer or other cryptocurrencies. You name it. As long as it’s legal tender, it’s probably accepted.

Tax Time: How Is Bitcoin Taxed?

How much does bitcoin cost?

There’s no simple answer to this one because it depends on who you ask.

The price of bitcoin, like all cryptocurrencies, is market dependent — meaning the price is dictated by the economic principles of scarcity, utility, supply and demand.

Click through if you’re unsure about bitcoin and want to read more about less risky investments than bitcoin. 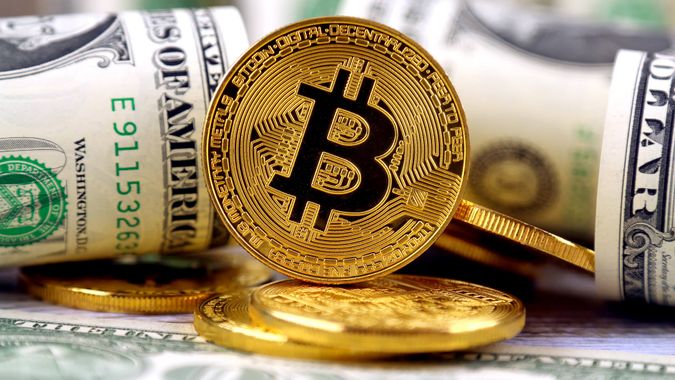 Crypto Prices Rally: How to Watch for a Bitcoin Bubble Bust

Use these easy tips to track crypto market bitcoin prices.

> Investing > Crypto > How to Get Bitcoins