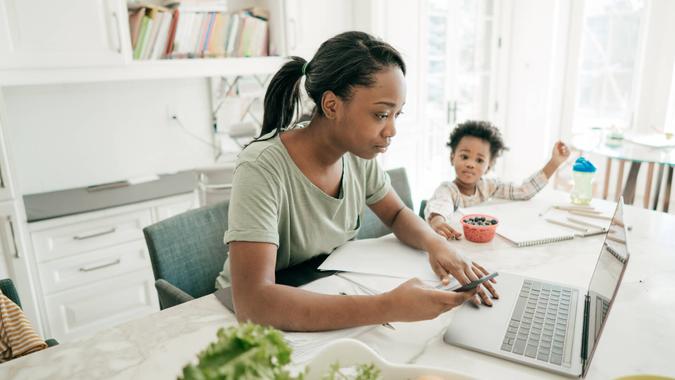 It’s no secret that the COVID-19 pandemic has had a disproportionate impact on women, as it exacerbated many of the challenges women already faced, including access to financing, industry segmentation and child care. A new term was even coined to describe it — “she-cession.” However, with the accelerated pace of vaccinations, many believed this would be short-lived and things would ameliorate in the fall. Now, as the nation’s children head back to school, the Delta variant is tampering hopes of a return to a somewhat “normal” for women, as the same issues remain, particularly where child care is concerned.

Already, several school districts have been forced to close. At least 90,000 children in 19 states have had to quarantine or isolate after contracting COVID-19 or coming into contact with someone who tested positive for the disease, The Hill reports. “The disruptions have caused uncertainty for parents, students and school districts that had hoped to resume in-person instruction after a year marked by lockdowns and virtual learning.”

The August job report was also evidence of the impact of Delta: only 235,000 jobs were added in the month, versus expectations of 720,000.

Following the report, Speaker of the House Nancy Pelosi tweeted: “Even as we have added 4 millions jobs with Pres. Biden, the share of women’s participation in our workforce has not recovered fully. To start to #BuildBackBetter with women demands a path for America’s economic recovery that confronts our child care crisis — made worse by covid.”

Even as we have added 4 millions jobs with Pres. Biden, the share of women’s participation in our workforce has not recovered fully.

To start to #BuildBackBetter with women demands a path for America’s economic recovery that confronts our child care crisis — made worse by covid. pic.twitter.com/u604RtdHze

“Women will need nearly nine straight years of job gains at last month’s level to recover the nearly 3 million net jobs they have lost since February 2020,” the report stated. The NWCL report also clarified that reported unemployment rates do not capture people who have left the labor force entirely and are no longer counted as unemployed. “If the over 1.6 million women who have left the labor force since February 2020 were counted as unemployed in August 2021, women’s unemployment rate would have been 6.9% in August 2021 instead of the reported 4.8%.”

Related: How Can Women Hedge Their Investments To Make Up for Making Less?

Women have indeed suffered the majority of pandemic-related job losses, as evidenced by women’s labor force participation rate, which is at 56% — its lowest level since 1987, according to Federal Reserve data.

From rearranging work schedules or helping with remote learning, “pandemic parenting” had been reshaping the workforce. “The larger decrease for women is unusual and likely reflects both the industries that this pandemic has hit and increased care responsibilities that have been pulling women out of the labor force,” White House economists Heather Boushey and Jared Bernstein said earlier this year.

Lana Peters , VP of the Americas at HR management platform Hibob, tells GOBankingRates that companies must work hard to address the profound effect the pandemic has had on women in the workforce.

“Many women left their jobs to focus on childcare due to virtual learning, even if remote options were available to them. As schools have begun reopening in-person, we’ve unfortunately already seen quarantines happening due to COVID exposures from the Delta variant, begging the question of whether we’ll see a rebound in women’s workforce participation, or if they’ll remain home,” Peters said.

She remains hopeful, however, saying she believes we’ll see women return to work at a steady, yet controlled, pace due to uncertainty with school closures.

See: How COVID-19 Has Impacted Retirement Savings
Find: How Women Can Conquer Their Financial Fears & Anxiety

“To bring women back, it’s imperative that companies are understanding of working parents’ unique needs and that they offer flexibility when unexpected situations arise — like forced quarantines for students. The pandemic has taught leaders that remote work can be effective, so organizations should continue to trust employees to do their best and create an environment that allows working mothers to both work and to parent at their fullest potential.”