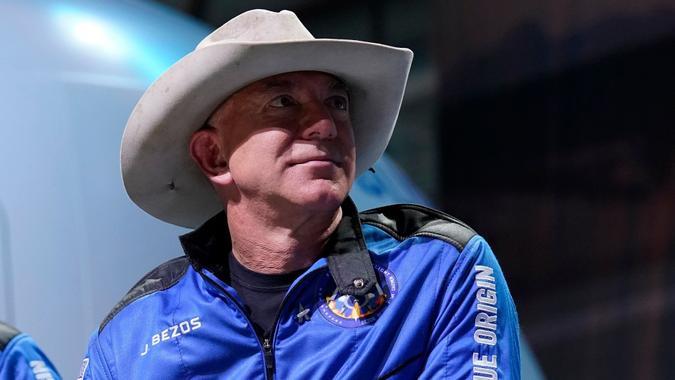 Jeff Bezos, freshly back from space, offered to cover $2 billion in fees for NASA’s Human Landing System (HLS) program in an open letter to the agency’s administrator Bill Nelson.

See: What Jeff Bezos Will Be Doing After Amazon and More Side Projects of Billionaires
Learn: Bitcoin Prices Surge Thanks to Amazon Rumors

“Blue Origin will bridge the HLS budgetary funding shortfall by waiving all payments in the current and next two government fiscal years up to $2B to get the program back on track right now,” Bezos said in the letter.

Last April, NASA awarded SpaceX the $2.89 billion contract to continue development of the first commercial human lander that “will safely carry the next two American astronauts to the lunar surface,” the agency said at the time.

The choice was disputed by Bezos, who reiterated his position in the letter, saying that “instead of investing in two competing lunar landers as originally intended, the Agency chose to confer a multi-year, multi-billion-dollar head start to SpaceX. That decision broke the mold of NASA’s successful commercial space programs by putting an end to meaningful competition for years to come.”

More: Just How Rich Are Jeff Bezos, Donald Trump and These Other Big Names?

“Instead of this single source approach, NASA should embrace its original strategy of competition. Competition will prevent any single source from having insurmountable leverage over NASA. Without competition, a short time into the contract, NASA will find itself with limited options as it attempts to negotiate missed deadlines, design changes, and cost overruns. Without competition, NASA’s short-term and long-term lunar ambitions will be delayed, will ultimately cost more, and won’t serve the national interest,” he added in the letter.

Bezos added in the letter that in April, only one HLS bidder — SpaceX — was offered the opportunity to revise their price and funding profile, leading to their selection.

In addition to bridging “the HLS budgetary funding shortfall,” Bezos says that Blue Origin will, at its own cost, contribute the development and launch of a pathfinder mission to low-Earth orbit of the lunar descent element to further retire development and schedule risks. In addition, he suggests that Blue Origin accepts a firm, fixed-priced contract for this work, cover any system development cost overruns and shield NASA from partner cost escalation concerns.

Discover: Virgin Galactic’s Launch to the Edge of Space Could Make Commercial Space Tourism a Reality
Find: Amazon and 17 Other Companies That Raised Their Minimum Wage to $15 (or More)

“I believe this mission is important. I am honored to offer these contributions and am grateful to be in a financial position to be able to do so. NASA veered from its original dual-source acquisition strategy due to perceived near-term budgetary issues, and this offer removes that obstacle,” Bezos added.