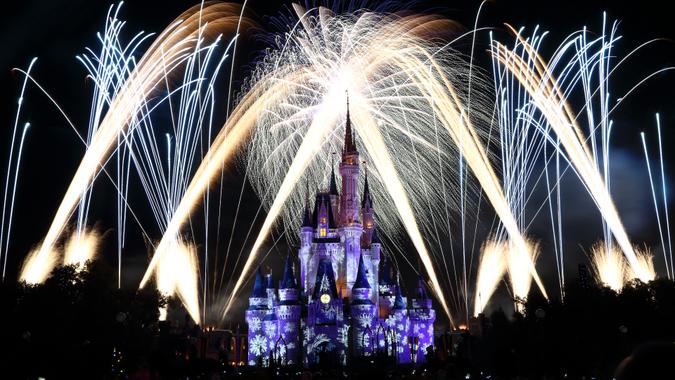 Disney is one of the most popular and well-known brands in the world. Few other companies give customers so much of what they want, which is fun family entertainment.

From iconic characters like Mickey Mouse to beloved theme parks and film and television productions, Disney’s reach encompasses the entire globe. But how much is Walt Disney stock worth right now, as the COVID-19 pandemic continues, and will it be a good buy going forward?

How Did Disney Stock Do Before the Pandemic?

Disney stock was a big winner for those holding it since 2010. By 2015, the stock had more than quadrupled in price before trading sideways from 2015 to 2019.

In 2019, before the COVID-19 pandemic struck, Disney stock had begun another big run, gaining over 30%.

How Did the Pandemic Affect Disney Stock?

Employees bore much of the initial brunt of the crisis. In April 2020, Disney announced that it was suspending pay to 100,000 workers, or roughly half of the company’s global workforce.

The company shuttered its theme parks on March 14, 2020, and its cruise line and entertainment divisions suffered similar lockdowns. In its second fiscal quarter, Disney reported an astonishing 93% drop in revenue.

Disney Stock as the US Economy Recovers

Disney stock is struggling to regain its footing as the economy bounces back from the worst of the pandemic. Although shares are down almost 16% from a year ago and 13% since the beginning of 2022, they’ve rallied over the past month and, as of the market close on Feb. 15, had regained their January loss.

It should be noted that the overall market has been skittish of late. Analysts have actually have been impressed by Disney’s comeback and return to profitability, with some, such as Bank of America, upgrading their outlooks. Considering Disney’s history and its ubiquitous place in American culture — not to mention investors’ portfolios — dips likely represent buying opportunities more than they do red flags for the company’s long-term prospects.

What Are Disney Parks and Cruise Ships Like Now?

The parks have reopened and are operating without any significant mandatory COVID-19-related restrictions, although Disney continues to manage capacity for the sake of employee and guest safety, according to the company’s first earnings release of the new year. All of the cruise ships have returned to the sea, albeit at reduced capacity.

Late last year, Christine McCarthy, Disney senior executive vice president and CFO, noted that vacation lead times had been longer due to the pandemic, which meant the company wouldn’t see substantial recovery in international attendance at U.S. parks until the end of fiscal 2022. However, higher volumes and, to a lesser extent, guest spending, drove growth at U.S. theme parks and experiences, the first-quarter 2022 earnings report said. Income from international parks and resorts also grew. All told, Disney Parks, Experiences and Products revenues increased from $3.6 billion in the first quarter of 2021 to $7.2 billion in the first quarter of 2022.

There was also good news regarding Disney’s direct-to-consumer business, which includes its streaming services. Revenue increased 34% compared to the same quarter last year, although operating losses also increased, by 27%, due to higher programming, production, marketing and technology costs at Disney+, and higher sports programming costs at ESPN. However, Disney+ subscribers grew by 12 million, to 129.8 million, beating the 125.73 million analysts had predicted, according to CNBC.

The company plans to make Disney+ available in over 50 countries next year and over 160 countries by the fiscal year 2023.

Just because Disney is a well-known, popular company doesn’t necessarily mean its stock is a good investment.

Many factors go into evaluating whether a stock is a good purchase, including:

In an effort to reserve cash amid disruptions caused by COVID-19, Disney suspended its semi-annual dividend payments in 2020, freeing about $1.6 billion in cash, according to a statement Disney released on May 5 of that year. So far, the company hasn’t indicated whether it will resume dividends in 2022.

If you’re a believer that Disney can achieve its former glory, it may still be a good time to buy.

Is Disney a Good Long-Term Stock?

Evaluating stocks over the long term can often be easier than picking stocks for the short term. Most stocks can be quite volatile over a short period, and even the best stocks can suffer horrendous sell-offs — including Disney, as evidenced by its nearly 50% drop during the peak of the COVID-19 panic.

But looking long term, it’s easy to make the case for owning Disney. Here are some of the company’s strengths:

Since Disney owns some of the most well-known and beloved entertainment and media properties in the world, it may be a good long-term investment.

As customers return to the company, the stock may even resume paying its dividend, which could provide another boost to the share price.

How To Buy Disney Stock

Before you learn how to buy Disney, make sure you want to buy it in the first place. Here’s some metrics to know beforehand:

2. Determine How Many Shares You Want To Buy

3. Decide Where To Buy Disney Stock

If you’re a long-term investor, you might consider buying Disney shares directly from the company. Under the Walt Disney Company Investment Plan, you can authorize regular deductions of at least $50 monthly from a bank account for the purchase of shares. Cash dividends are automatically reinvested in additional shares.

If you’d rather be more flexible with your investments, you can buy shares of Disney from any online broker. Many online brokers these days offer zero commissions on stock trades, and some offer fractional share purchases. This means that if you only have $100 to invest, for example, you could buy the percentage of a share worth $100 at the time of purchase.

If you’re buying Disney stock from a broker, you’ll have to enter an order type.

The most common is a market order, which is an instruction for a broker to execute a trade at the next available price.

A limit order is another type of common order. A limit order designates a price at which you want a trade executed. If the stock never drops to your limit price, you’ll never buy the stock, which can only be purchased at your designated price or lower.

Should You Invest In Disney Stock?

Whether or not you should invest in Disney stock is a discussion best reserved for you and your financial advisor. However, here are some of the factors you should incorporate into your decision-making process:

Information is accurate as of Feb. 16, 2022, unless otherwise noted.